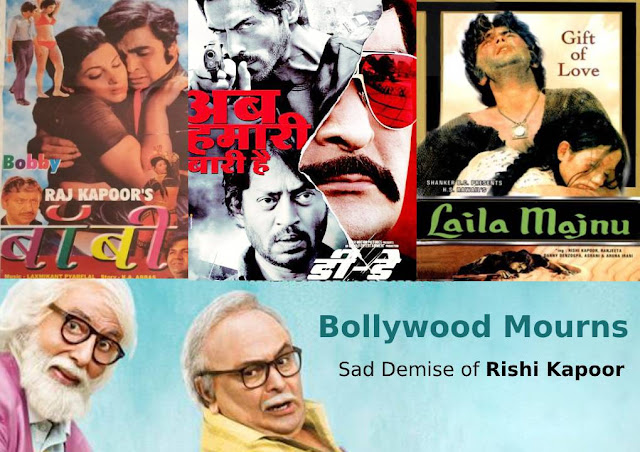 Bollywood lost their two unmatched Actors, Rishi Kapoor and Irfan Khan. They were assest of the entertainment world. Its hard to understand and believe that they were not with us know—an irreparable loss for Indian cinema.
Veteran Actor Rishi Kapoor born in 4th September 1952 and leave this world on 30th April 2020. His debut in the Bollywood world with the movie Bobby.  After bobby movie he never sees back, he changed the style of romance and people also like his chocolate boy image. He never limits his self with one role; he works for different – different projects with unique roles and every time he shocks his fans, which role or image of him is best because there is no comparison between his various characters.
He does lover boy, comedian, serious and negative all kind of role and all are his best.  Here is a small list of his different movies:
He is a person who is active not only in cinema also on the social front. He never feared from other, boldly express their thought on social platforms.

Know  what other actors twitted for the veteran actor Rishi Kapoor:

taapsee
“My most favourite picture with him. Worked with him twice n the kind of brash honest compliments this man gave have never left my heart n mind. Even in his bullying there was so much love that one couldn’t help enjoy listening to him. The most entertaining stories came from him. the only costar of mine who could beat me in being ‘brutally’ honest. Sir humaari hat-trick reh gayi. I’m sure I will meet him somewhere n this hug shall be repeated with the same smile on our face.”
vickykaushal09
“Absolutely shattered and heart broken to wake up to the news of the loss of Rishi Kapoor Ji, one of the liveliest persons amongst us. The last time when I met him in NY, he was fighting the battle like a boss, with Neetu Ma’m by his side and a smile on his face. This is utterly tragic and incomprehensible. My condolences to Ranbir, Neetu Ma’m and the entire family. May his soul be resting in peace and raising a toast to a life well lived with the Gods in heaven. “
Priyanka Chopra
“My heart is so heavy. This is the end of an era. #Rishisir your candid heart and immeasurable talent will never be encountered again. Such a privilege to have known you even a little bit. My condolences to Neetu mam, Ridhima, Ranbir and the rest of the family. Rest in peace Sir.”
Akshay Kumar
“It seems like we’re in the midst of a nightmare…just heard the depressing news of #RishiKapoor ji passing away, it’s heartbreaking. He was a legend, a great co-star and a good friend of the family. My thoughts and prayers with his family “