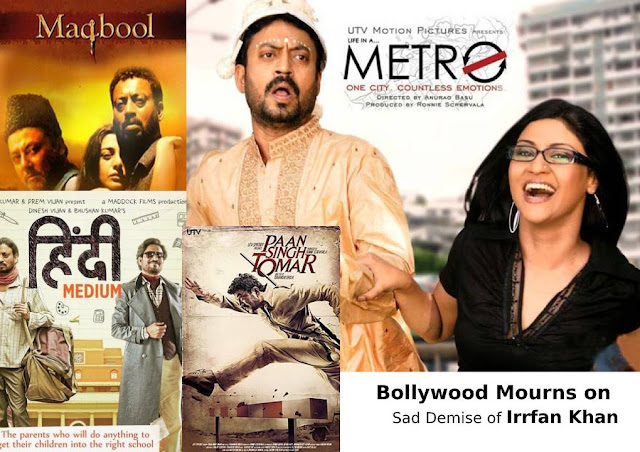 Irrfan Khan was born in 7 January 1969 and left this heavenly body on 29 April 2020. Actor is known for his work in Bollywood. He has also worked for British films and Hollywood. In his career of nearly 30 years, Irrfan honoured by many awards– National Film Award and Filmfare Awards in four categories. He was a person who inspired the young actors from his remarkable journey to bollywood.
Irrfan Khan was also a skilled cricketer and selected for CK Nayudu Tournament due to the non aviblity of funds he did not turn for the tournament.
Before entering in Hindi cinema he work as a theatre artist and do many plays. When he reached to the dream city Bombay, he worked as air conditioner repairer and one day he get the chance to visit the superstar Rajesh Khanna to repair the air conditioner.
Irrfan Khan married to Sutapa Sikdar in 1995, who is an Indian Film Producer, Dialogue Writer and Screenplay Writer. Irrfan khan was ill from long time from colon infection.
Irrfan Khan was diagnosed with an undisclosed disease in February 2018. The actor put the speculations to an end stating that he was suffering from a neuroendocrine tumour – a rare form of cancer that can target various parts of the body via his twitter handle. The same year Irrfan Khan travelled to London for the treatment.
On April 28, 2020, Irrfan Khan was rushed to Kokilaben Dhirubhai Ambani Hospital in Mumbai where he was treated for colon infection. On April 29, 2020, four days after his mother’s death in Jaipur, Irrfan Khan passed away at the age of 53.
Irrfan Khan is man who does not have any bollywood background, he start his journey own by own, he fights and win.
Irrfan Khan also acted in TV Serials —  Chanakya, Bharat Ek Khoj, Sara Jahan Hamara, Banegi Apni Baat, Chandrakanta, Shrikant (Doordarshan), AnooGoonj, etc.
In 2003-2004, Irrfan Khan acted in a short film ‘Road to Ladakh’. After receving good reviews for shart films at international festivals, Ashwin Kumar made a full-length feature film starring Irrfan Khan. The same year, Irrfan Khan played the title role in ‘Maqbool’ which was an adaptation of Shakespeare’s Macbeth.
The turning point came in the year 2008 from the movie Slumdog Millionaire where he played the role of a police inspector. Irrfan Khan and the cast of the movie won a Screen Actors Guild Award for Outstanding Performance by a Cast in a Motion Picture and the film won 8 Oscars.  In 2009, Irrfan Khan acted in the film ‘Acid Factory’.
Every movie of Irrfan Khan tells the story of his hard work by his acting skills. Some movies of Irrfan Khan:

Some tweets from Cinema World:

Shah Rukh Khan
“My friend…inspiration & the greatest actor of our times. Allah bless your soul Irrfan bhai…will miss you as much as cherish the fact that you were part of our lives.
“पैमाना कहे है कोई, मैखाना कहे है  दुनिया तेरी आँखों को भी, क्या क्या ना कहे है” Love u”
PRIYANKA
“The charisma you brought to everything you did was pure magic. Your talent forged the way for so many in so many avenues.. You inspired so many of us. #IrrfanKhan you will truly be missed. Condolences to the family.”
Deepti Naval
“I feel deeply saddened and disturbed at this untimely demise of dear friend and colleague Irfan Khan. It feels horrible, under these circumstances, to not even be able to pay my last respects to this great artiste. My condolences to his family… REST IN PEACE dear friend!”
Akshay Kumar
“Such terrible news…saddened to hear about the demise of #IrrfanKhan, one of the finest actors of our time. May God give strength to his family in this difficult time”
Anupam Kher
“Nothing can be more heartbreaking and tragic than the news of passing away of a dear friend, one of the finest actors and a wonderful human being #IrrfanKhan. Saddest day!! May his soul rest in peace. #OmShanti”